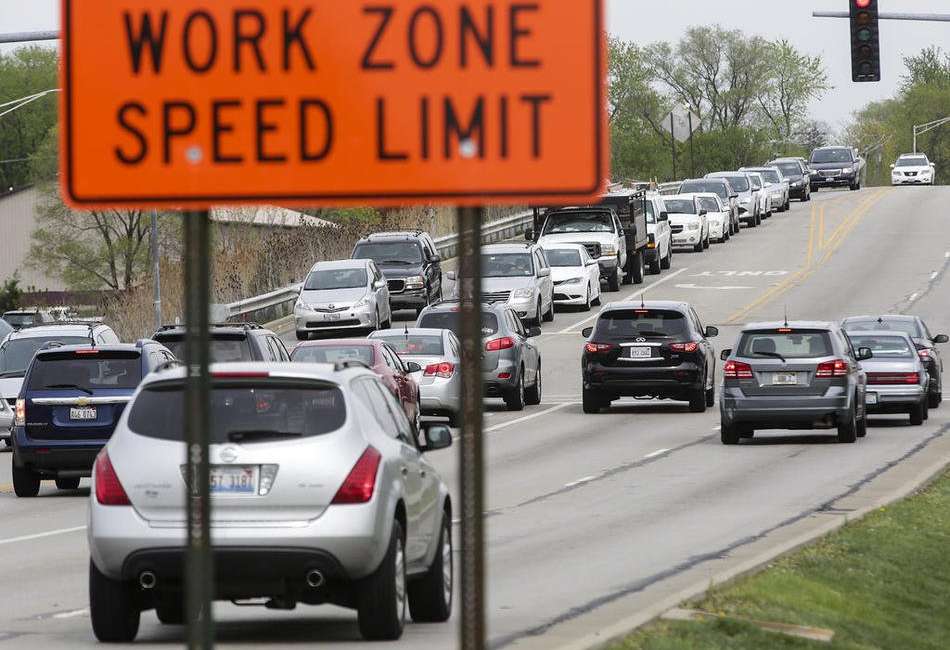 JOLIET – The roadwork season started in earnest this week as motorists cruising around Joliet could come across construction crews at several spots.

The biggest project to commence was the reconstruction of the Caton Farm Road bridge deck at the DuPage River, a project expected to frustrate commuters until Thanksgiving.

Meanwhile, traffic at Interstate 55 and Route 30 continues to be slowed by interchange improvements. And, the state began inspections on the Interstate 80 bridge over the Des Plaines River, which will involve temporary lane closures until May 7.

Drivers heading to downtown Joliet need to bypass the Jefferson Street bridge, which is being painted, only to find Chicago Street is being torn up as Nicor Gas works on gas mains.

The biggest worry in Joliet is the Caton Farm Road bridge project, which has narrowed a four-lane road used by about 25,000 vehicles a day to a two-lane road at the bridge.

On top of that, the intersection at Caton Farm and Essington roads is being rebuilt in the coming months as turn lanes are added to relieve traffic backups there. New traffic lights will be added, too.

“There will be some lane closures, but the intersection will never be totally closed down,” Trizna said.

That project is expected to start by July 1 with completion by Thanksgiving.

“Our goal is to get everything completed by the Christmas season,” Trizna said.

Both the Nicor work on Chicago Street and state work on the downtown bridges are scheduled to last through the summer.

The Jefferson Street bridge painting is scheduled for completion in June. But then the state plans to close the Cass Street bridge for a paint job that will last into the fall.

Several projects – some large, some small – are on the Will County Department of Transportation’s docket this construction season, causing intermittent lane closures.

One project underway involves deck repair work over the DuPage River along Channahon-Minooka Road, reducing it to one lane. The project will be completed by the end of June.

By mid-May, road reconstruction starts on a one-mile stretch of Briggs Street between Route 52 and Mills Road outside Joliet, said Jeff Ronaldson, assistant county engineer. The work is expected to continue through October.

That project will include road closures later this summer. Detours will take motorists west to Richards Street.

The county has contracted with P.T. Ferro for an $8.7 million reconstruction of 135th Street from New Avenue to east of Smith Road near Romeoville.

The two-lane road will be widened to five lanes with curbs, gutters and storm sewers, according to P.T. Ferro’s website.

The roadway will remain open to traffic with intermittent lane closures. Smith Road south of 135th Street will be restricted to one-way traffic with a marked detour for a portion of the project, according to P.T. Ferro.

Ronaldson said completion for that project is slated for summer 2017.

“All construction comes with routine delays,” Ronaldson said. “We ask drivers to be patient while traveling in construction zones.”