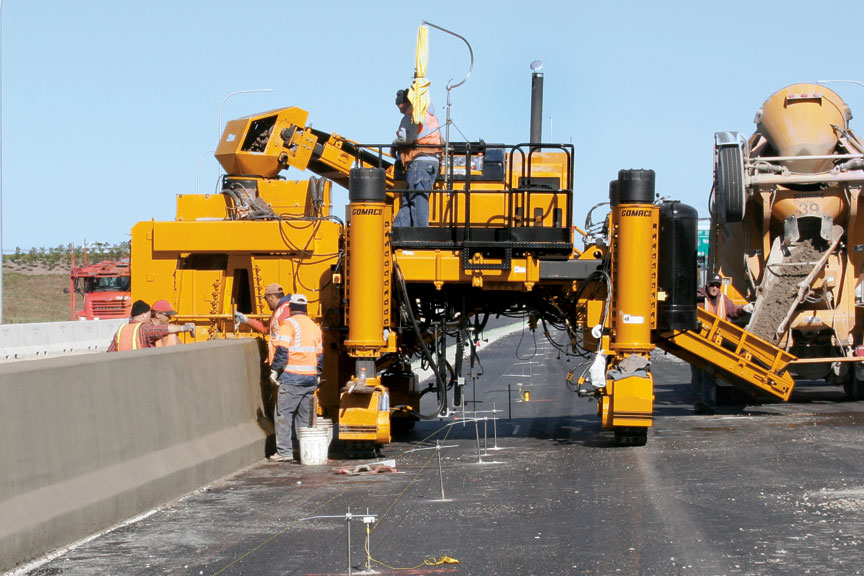 P.T. Ferro Construction Company first started work in 1964 as utility contractors in Joliet, Illinois. Since that time, they’ve taken on a variety of challenges as they expanded their business. They added a GOMACO GT3600 curb and gutter machine in 2004 and started slipforming their own curb on their projects. The Illinois Department of Transportation (IDOT) let a barrier wall project on Interstate 55, just west of their Joliet location. They had never slipformed barrier wall before, but weren’t afraid of the challenge. They consulted with their GOMACO distributor, Finkbiner Equipment Company, and with GOMACO engineers to find the right machine and mold profile to complete the 22,000 lineal feet (6706 m) of variable height, center median barrier. They purchased a Commander III with a four-track barrier package assembly. The mold was built with double variable capabilities so each side of the wall could be adjusted up to 30 inches (762 mm) to meet project specifications in a single slipforming pass.

Choosing the right machine was an important decision in the project’s early phase. P.T. Ferro was working under a tight deadline for completing a portion of the work before winter weather moved in. “This job had an interim completion date that included a penalty,” Phil Hess, President of P.T. Ferro, said. “We were under the gun to buy a machine, and get 2500 feet (762 m) of barrier wall slipformed before winter set in.” Their new Commander III was delivered on time on October 22. The project completion’s date for the year was November 15. The completion date included not only finishing the barrier wall, but also the entire project of adding a new lane and opening up that section of interstate to traffic again. “Once the Commander III arrived, we only needed a couple of days of training,” Eric Zola, General Superintendent for P.T. Ferro, said. “The operating systems on the GT-3600 and the Commander III are very similar, so it was easy for our people to learn. Because of the background we already had and the ease of using the GOMACO equipment, I’d say we were up to maximum production within a couple of days.”

On the first day of their barrier pour, IDOT had a review team on site to witness the slipforming. “They were impressed with the quality of our wall and our total production,” Zola explained. “And it was just our first day. It only got better from there on out.”

“We were emptying concrete trucks every 14 minutes… that’s a lot of concrete. Our concrete supplier, Welsch Ready-Mix, did an excellent job for us. “The key was getting the concrete to the site at the right slump, having the vibrators set correctly and then just having great personnel out there.” The concrete mix design was an IDOT approved mix with slump averaging between 0.5 to 0.75 inch (13 to 19 mm). P.T. Ferro used nine straight vibrators placed at strategic locations in their barrier mold. They also equipped their Commander III with a 24 inch (610 mm) long conveyor extension. Zola felt the extension made it easier to get concrete from the trucks into the mold to aid their overall production rate. Finishing work was kept to a minimum with only a light broom finish applied behind the Commander III. P.T. Ferro finished their first portion of interstate within the time allowed. They went back and completed the second portion of the project and impressed everyone at IDOT with their slipformed barrier.

“It was a massive wall within a restricted area, but it worked well for us,” Hess said. “From Marty Ahrendt at Finkbiner Equipment to GOMACO… everybody was just top notch. “The key, besides the equipment and the people, is good concrete… The concrete is crucial. Because of this experience, we’re looking forward to doing more wall work with our Commander III in the near future.”